Gah, this is all nearing completion. Will have a wrap-up of the whole series later tonight; I, for one, await my conclusions with bated breath.

Before I can finish the overall evaluation, here are the results of my last trial, an iteration of the bag-of-tags accuracy tests I’ve been doing, this time with LingPipe. Note, though, that the section below on tagset conversion and this bag-of-tags approach is probably more interesting than the specific LingPipe results (and there are nice summary graphs of the whole shebang down there, too!).

For reference, the list of basic tags and a LingPipe-to-MorphAdorner (i.e., Brown-to-NUPOS) translation table are available. Graphs are below, problematic translations from Brown to NUPOS as follow:

* Tag counts to which adjustments have been applied (see above) 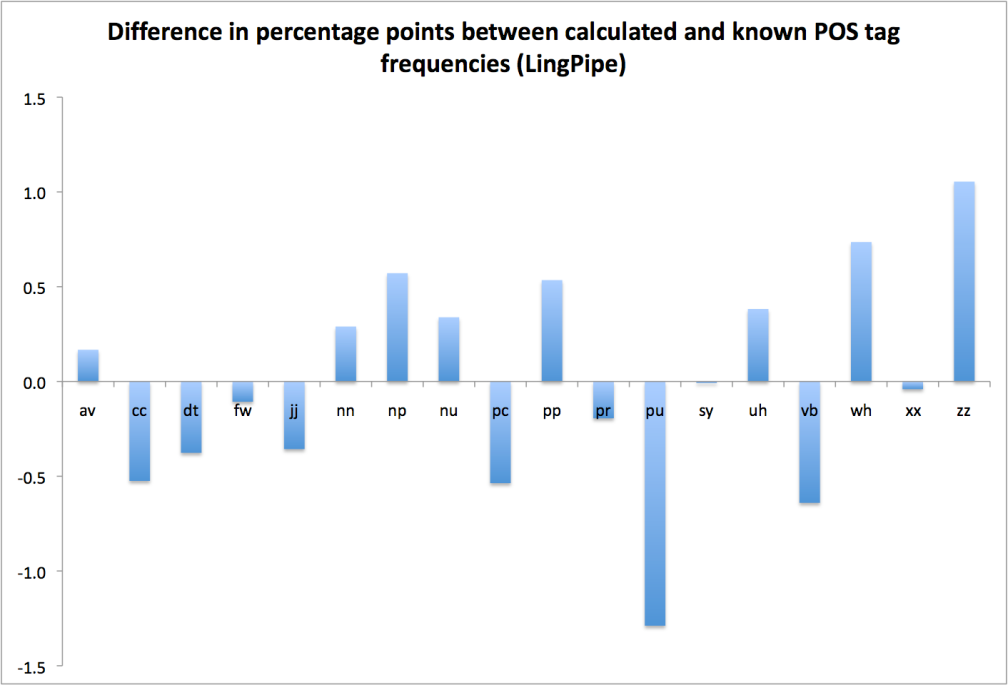 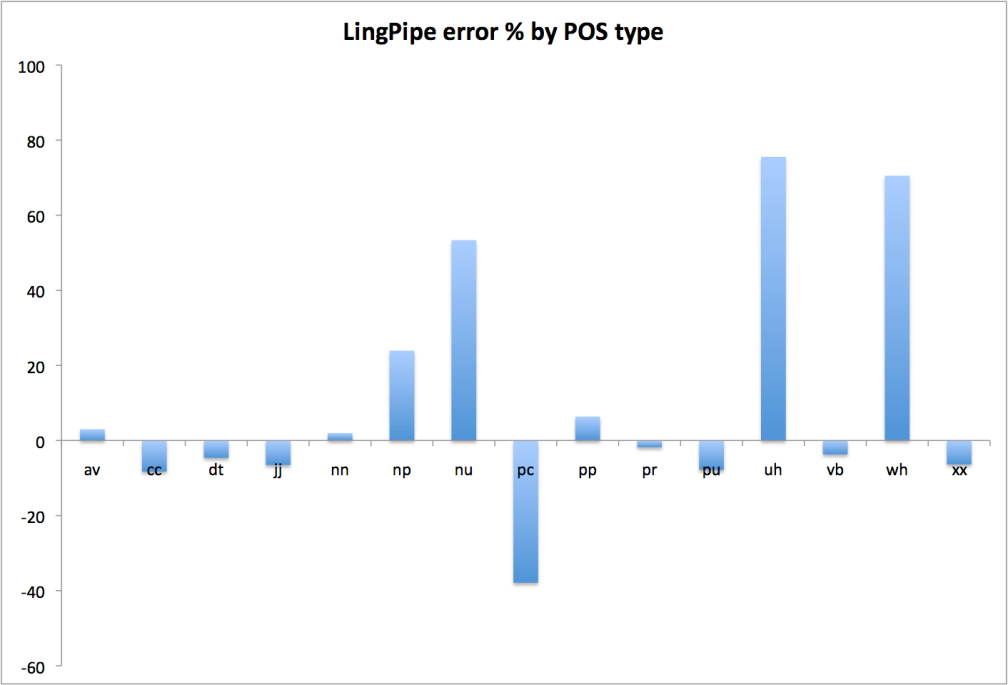 This is about what we’ve seen with the other taggers that use a base tagset other than NUPOS; it’s a bit better than either Stanford or TreeTagger, a fact that stands out more clearly in the summary comparison graphs below, but there are just too many difficulties converting between any two tagsets to say much more. One could certainly point out some of the obvious features in the present case—LingPipe has a thing for numbers, proper nouns, wh-words, and interjections, plus an aversion to punctuation, verbs, and participles—but I think the only genuinely interesting feature is LingPipe’s willingness to tag things as unknown. I’ve left this out of Figure 2 because it badly skews the scale, but notice in the data above that there are just 167 ‘zz’ tags in the reference corpus, but 42,000+ instances of ‘nil’ (=’zz’) in the LingPipe output.

We didn’t see anything like this with Stanford or TreeTagger, but it might be useful. (Of course, it might also be a mess.) I can imagine situations in which it would be better to know that the tagger has no confidence in its output rather than pushing ahead with garbage results. This is one of the reasons that taggers with the option of producing confidence-based output are (potentially) useful, since they would allow one to isolate borderline cases. LingPipe and TreeTagger have such an option; Stanford and MorphAdorner do not, to the best of my knowledge.

Thoughts on Converting between Tagsets

First, some graphs that collate the results of all the bag-of-tags trials. They’re the same as the ones I’ve been using so far, but now with all the numbers presented together for easier comparison.

As always, click each graph for the full-size image.

This is the one I like best, since it makes plain the relative importance of each POS type; large errors on rare tags generally matter less than modest errors on common tags, though the details will depend on one’s application.

Confirming what you see above: MorphAdorner does well over the reference data, which looks like its own training corpus. (Recall that the MorphAdorner numbers are taken from its cross-validation output and without the benefit of its in-built lexicon, so it’s not just running directly over material it already knows. Apologies for the personification in the preceding sentence.) LingPipe is marginally better than Stanford or TreeTagger (this would be more obvious if the log scale weren’t compressing things in the 1-10% error range), but all three (using different training data and different tagsets) lag MorphAdorner significantly (by an eyeballed order of magnitude, more or less).

So … what have I learned from these attempts to measure accuracy across tagsets? Less than I’d hoped, at least in the direct sense. These trials were motivated by an interest in whether or not taggers trained on non-literary corpora would produce results similar to MorphAdorner’s (which is trained exclusively on literature). The problem was that they all use different tagsets out of the box, and I was somewhere between unwilling and unable to retrain all of them on a common one. My thinking was that I’d be able to smooth out their various quirks by picking a minimal set of parts of speech that they’d all recognize, and then mapping their full tagsets down to this basic one.

The problem is that the various tagsets don’t agree on what should be treated as a special case (wh-words, predeterminers, “to,” etc.), and the special cases don’t map consistently to individual parts of speech. The numbers I’ve presented in each of the recent posts on the topic have tried to apply appropriate statistical fixups, but they’re hacks and (informed) guesses at best. In any case, I think what I’m really seeing is that taggers are reasonably good at reproducing the characteristics of their own training input (which we knew already, based on ~97% cross-validation accuracy). So MorphAdorner does well (generally ~99% accuracy over the reduced tagset, i.e., distinguishing nouns from verbs from other major parts of speech) on data that resembles the stuff on which it was trained; the others do less well on that material, since it differs from their training data not just by genre, but also (and more importantly, I think) by tagset.

(An aside: LingPipe is trained on the Brown corpus, which contains a significant amount of fiction and “belles lettres” [Brown’s term, not mine]. Stanford and TreeTagger use the Penn treebank corpus, i.e., all Wall Street Journal, all the time. So there’s a priori reason to believe that LingPipe should do better than either of those two on literary fiction. I like the Brown tagset better than Penn, too, since it deals more elegantly with negatives, possessives, etc.)

For for the sake of comparison, I looked into running a bag-of-tags evaluation of MorphAdorner over the Brown corpus to see if the accuracy numbers would turn out more like those for the other taggers when faced with “foreign” data. My strong hunch is that they would, but it was going to be more trouble than it was worth to nail it down adequately. Perhaps another time.

Takeaway lessons? Mostly, be careful about direct comparisons of the output of different taggers. If I see somewhere that Irish fiction of the 1830s contains 15% nouns, and know that I’ve seen 17% in British Victorian novels, I probably can’t draw any meaningful conclusions from that fact without access to the underlying texts and/or a lot more information about the tools used. It also means that if I settle on one package, then later change course, I’ll almost certainly need to rerun any previous statistics gathered with the original setup if I’m going to compare them with confidence to new results.

More broadly speaking—and this looks ahead to the overall conclusions in the next post—this all highlights the fact that both tagsets and training data matter a lot. The algorithms used by each of the taggers do differ from one another, even when they use similar techniques, and they make different trade-offs concerning accuracy and speed. But the differences introduced by those underlying algorithmic changes—on the order of 1%, max—are small compared to the ones that result from trying to move between tagsets (and, presumably, between literary and non-literary corpora, though the numbers I’ve presented here don’t throw direct light on that point).

This concludes the bag-of-tags portion of tonight’s program. Stay tuned for the grand finale after the intermission.

My name is Matthew Wilkens. I’m an associate professor of English at Notre Dame. See the "About" page for more information and a contact form.