Following on from the MorphAdorner bag-o-tags post, here’s the same treatment for the Stanford tagger.

I’ve used out-of-the-box settings, which means the left3words tagger trained on the usual WSJ corpus and employing the Penn Treebank tagset. Translations from this set (as it exists in Stanford’s output data) to my (very) reduced tagset are also available.

There are a couple of reasons to expect that the results will be worse than those seen with MorphAdorner. One is the tokenizer. Another is the different (non-lit) training set. A third is incompatibility between the tagsets. This last point is unfortunate, but there’s not really any easy way to get around it. It crops up in a few of the tags, and works in both directions:

* Tag counts for which there is reason to expect systematic errors

And then the graphs (click for large versions). Note: These graphs are corrected for the xx/av problem discussed above; ‘xx’ tags in the reference data have been rolled into ‘av’ here. 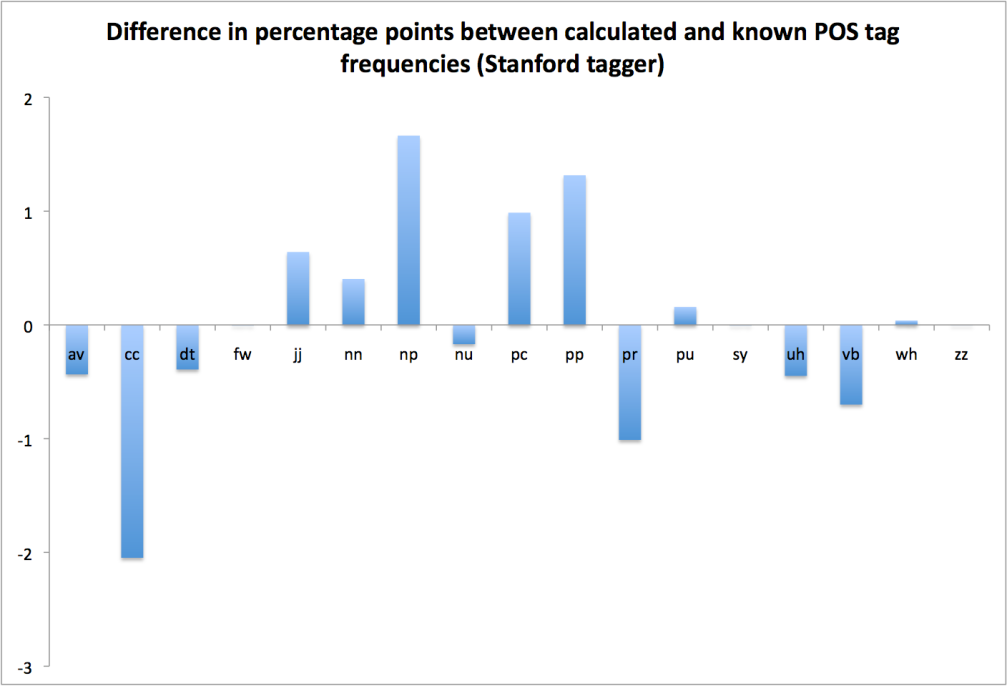 First, there are a few POS types that we know will be off, since there’s not a straightforward conversion for them between the NUPOS and Penn tagsets. These are: dt, jj, pc, and pp. Adjectives (jj) are the only ones that are a bit of a disappointment, since that’s a class in which I have some interest. On the plus side, though, this is a problem connected to the ‘pdt’ tag in Penn, and there are only about 4,000 occurrences of it in Stanford’s output, compared to 235,000+ occurrences of ‘jj.’ Even if half the ‘pdt’ tags should be ‘jj’ rather than ‘dt’, that’s still less than a 1% contribution to the overall error rate for ‘jj’.

That said, what sticks out here? Well, the numbers are a lot worse than those for MorphAdorner, for which the worst cases (proper nouns, nouns, and punctuation) were 0.1 – 0.2 percentage points off, compared to 1 – 2 here. So we have results that are about an order of magnitude worse. And in MorphAdorner’s case, the nouns overall may not have been as bad as they look, since proper nouns were undercounted, while common nouns were overcounted by a roughly offsetting amount. For Stanford, though, both common nouns and proper nouns are overcounted, so you can’t get rid of the error by lumping them together.

Similarly, relative error percentages for most tag types are much higher. In Figure 2, the main cluster of values is between 1% and about 50%; for MorphAdorner, it was 0.1 and 1.0. Nouns, verbs, adjectives, adverbs, and pronouns—all major components of the data set—are off by 3% to 10% or more.

The real question, though, is what to make of all this. How many of the errors are merely “errors,” i.e., differences between the way Stanford does things and the way MorphAdorner does them. What I’m interested in, ultimately, is a tagger that’s reliable across a historically diverse corpus; I don’t especially care if it undercounts nouns, for instance, so long as it undercounts them all the time, everywhere, to the same extent. But in the absence of literary reference data not linked to MorphAdorner, and without the ability to train the Stanford tagger on MorphAdorner’s reference corpus, it’s hard for me to assess accuracy other than by standard cross-validation and this bag of tags method.

Takeaway point: I don’t see any compelling reason to keep Stanford in the running at this point.